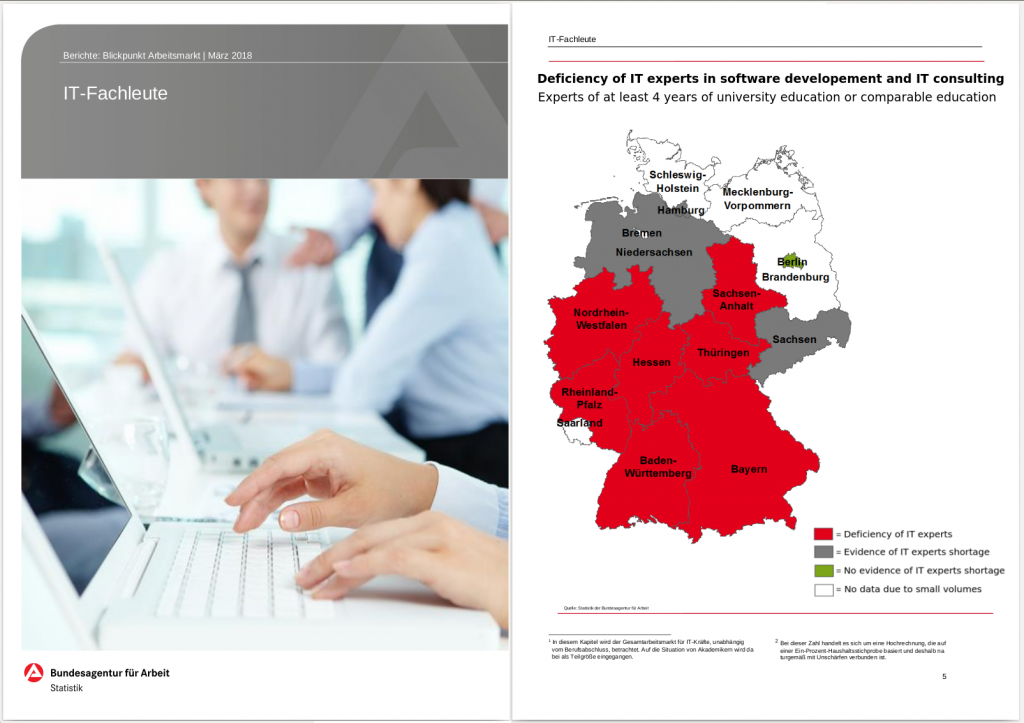 IT work in Germany 2017 – the most important facts

The job market for IT professionals in Germany

The labour market for IT professionals* developed very well in 2017. There are still only a few unemployed with IT professions. The expansion of IT into almost all areas of work and life has been combined with an above-average increase in jobs for computer specialists in recent years. The demand for new employees, measured by the number of jobs registered with the Federal Employment Agency in 2017, was at its highest level. At the same time, companies found it difficult to fill vacant positions for highly qualified software developers. An increasing number of computer science graduates could make a positive impact on skilled workers recruitment.

* – This section covers the entire IT labour market, regardless of the level of qualification.

NUMBER OF EMPLOYEES CONTINUES TO GROW

According to the microcensus 2016**, around 983,000 IT professionals were employed in Germany. That was 5% more than in previous year. This is a further step on the growth path of recent years. Between 2012 and 2016, the number of employed IT specialists increased by a total of 120,000. This number includes employments with benefits package (sozialversicherungspflichtig)***, the self-employed, officials as well as part-time employees.

Employments with employment benefits makes the majority of the labour force. The employment statistics of the Federal Employment Agency show in the year 2017 around 755,000 IT specialists employed with employment benefits package. A comparison with the previous year shows an increase of 38,000 persons (+5%), after there had already been strong growth in the years before. 45% of employees have a degree from an university of applied science (Fachhochschule) and an university (Figure 1).

** – This number is a projection based on a one-percent household survey and is therefore subject to uncertainty. Source: https://www.destatis.de/DE/Publikationen/Datenreport/Downloads/Datenreport2016.pdf?__blob=publicationFile
*** –  All unclear terms see GLOSSARY 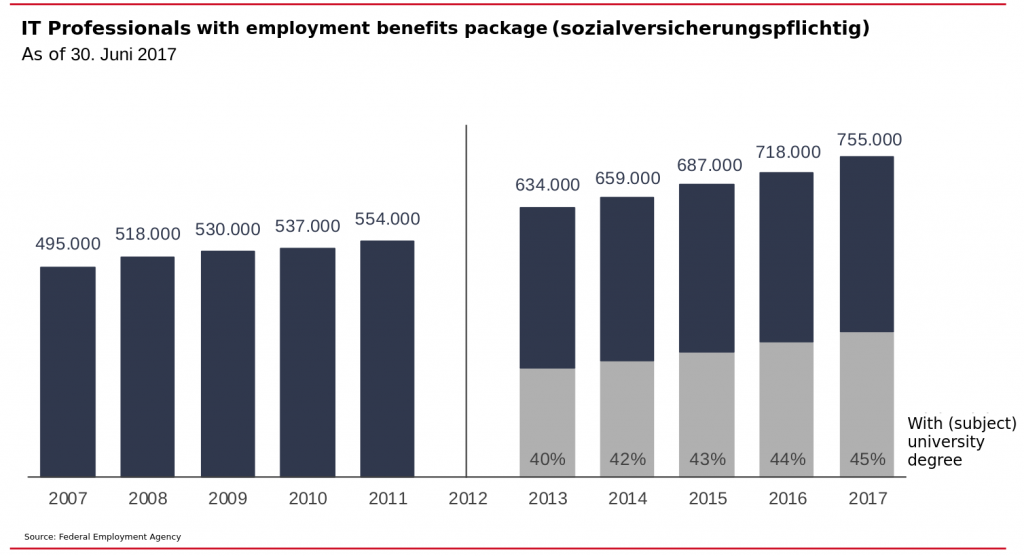 ESPECIALLY THE NUMBER OF EMPLOYEES  WITH THE SOCIAL PACKAGE IS GROWING

The growth in employment is largely due to an increase in employment with the social package. The employment statistics of the Federal Employment Agency, for which data are already available for the year 2017, show around 755,000 IT professionals who were employed in Germany with the social package. A comparison with the previous year shows an increase in employment of 38,000 persons (+5%), after there had already been strong growth in the years before. 45% of employees have a degree from a university of applied sciences or a university of applied sciences (s. Figure 1).

Almost every third of the 755,000 IT employees with the social package designs, creates, installs, supports or researches hardware and software solutions or complex IT systems (Figure 2). Typical training courses (Ausbildung)*** in this field are, for example, IT specialist, IT technician, IT specialist (high education) – general or applied IT or business IT specialist.

More then every fourth of them has their main focus on software development and programming. For a about every fifth the focus is on tasks such as IT system analysis, user consulting or IT products sales. Another fifth of the IT specialists are active in network technology, coordination, organisation, system and web administration or in database development and database administration. Over 3% of IT employees work entirely as managers.

Statistically, IT professionals are a young occupational group. Almost 9 out of 10 employees are younger than 55 years old. 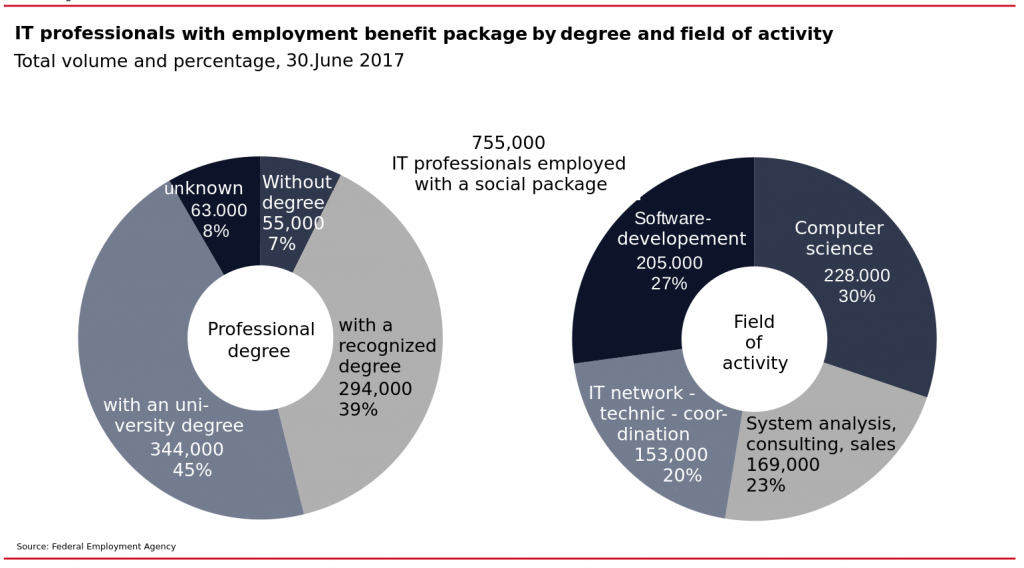 REPRESENTED IN ALL BRANCHES OF INDUSTRY

More than two fifths of IT professionals are employed in companies whose focus is on the delivery of information technology (IT) services (Figure 3). The other skilled workers are employed in IT departments of companies in other branches. Manufacturers of computer equipment, electronic and optical goods, (municipal) administration, mechanical engineering, social insurance foundations, German armed forces and the publishing industry each have a share of 3% in the employment of IT professionals.The share of 2 % registered in manufacture of motor vehicles and suppliers, in the retail trade, in architecture and engineering companies and in financial service providers. 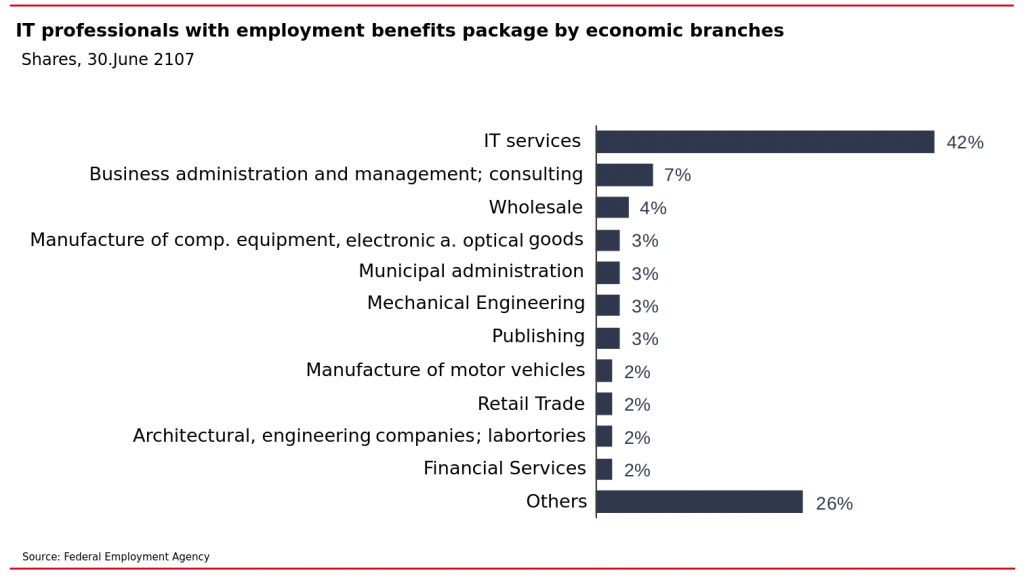 The majority of IT jobs are located in the metropolitan areas of Munich, Berlin, Hamburg, Stuttgart and Frankfurt. Almost 1/4 of all IT employees in Germany work there (Figure 4). There are also very many IT professionals in the districts of Heidelberg, Bad Homburg, Fürth, Nuremberg, Wiesbaden, Karlsruhe-Rastatt and Düsseldorf. 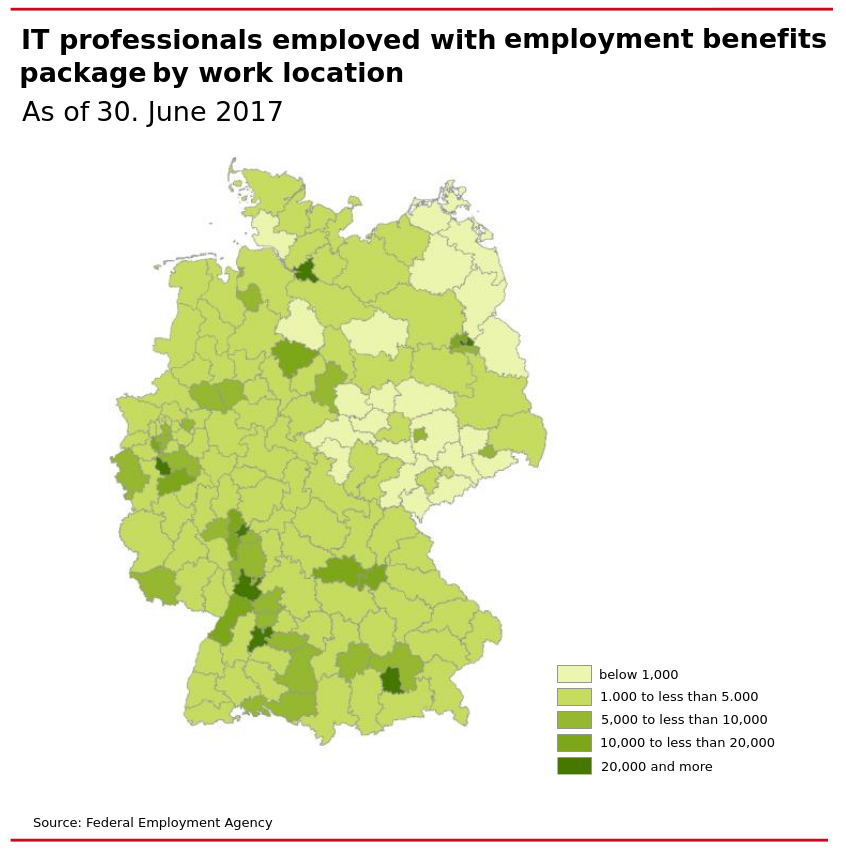 Germany is also an attractive location for foreign IT workers. Around 67,000 IT workers – 9% of IT employment with the social package in 2017 were occupied by workers of foreign citizenship. Their number has grown significantly. While the number of German IT staff increased by 4% compared to the previous year, the number of foreign IT staff increased by 16%.

The greatest increase was in the number of IT specialists from India, the Russian Federation and Turkey (almost 9,000 employees). The number of German IT professionals increased by 29,000 in the same period.

Almost the half of the foreign IT specialist comes from one country in the European Union (Figure 5). The biggest number from EU nationalities represented by Italy and Spain, followed by France, the United Kingdom, Austria and Poland. Romania, Bulgaria and Croatia had around 4,900 IT professionals working in Germany.

Larger employment groups outside the EU in 2017 were mainly represented by around 8,500 specialists from India and around 3,500 each from Russia and 3,400 from Turkey. Other countries were Ukraine, the Balkan states and the USA.

In addition there were around 2,800 persons who had citizenship of a non-European country which asylum was granted. The number of recognized asylum seekers employed as IT professionals has grown strongly – by 51% compared to the previous year. In absolute figures, it were increase of 900 persons, while the previous year showed   the increase of 500 persons. 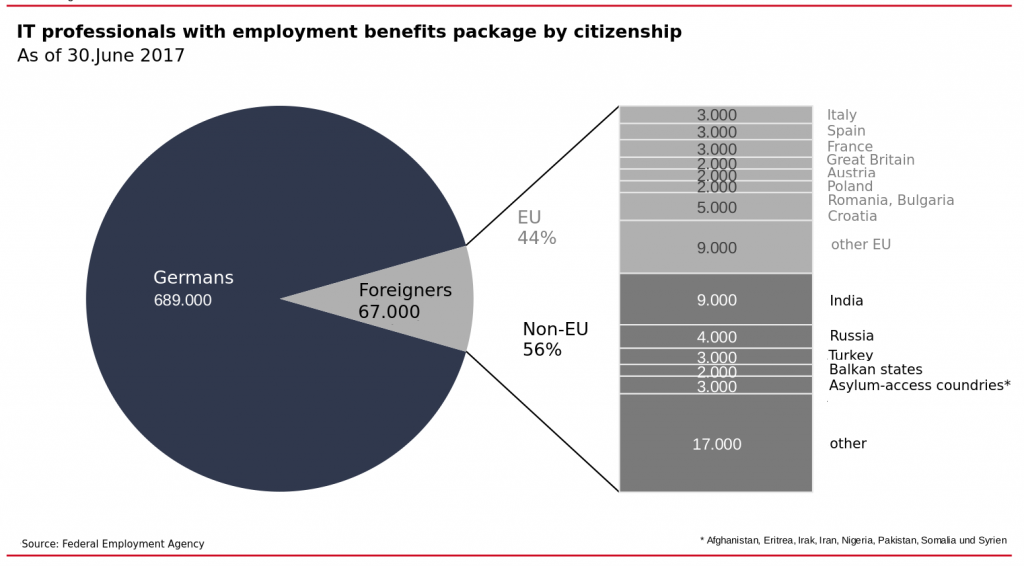 Around 90,000 IT specialists were self-employed in 2016. The majority – around 67,000 – provided their services without any further employees, for example as freelancers. Around every fourth of self-employed persons had hired additional employees. The main areas of activity were, for example, software development and programming as well as IT application consulting.

DEFICIENCY OF IT EXPERTS IN SOFTWARE DEVELOPMENT AND IT APPLICATION CONSULTING

Deficiencies have been observed over many years among software developers and IT application consultants whose knowledge corresponds to at least 4 years of computer science studies. The number of unemployed IT experts per registered job in these occupational fields was very low in 2017 (161 to 100).

The shortage of skilled workers is evident in almost all federal states. In Hamburg, Lower Saxony and Saxony, the situation is not so bad – but there are signs of it. In Berlin, no shortage is evident: the comparatively short vacancy period*** and the high number of unemployed software developers and user consultants speak against a shortage in the federal capital (Figure 6, s. below). 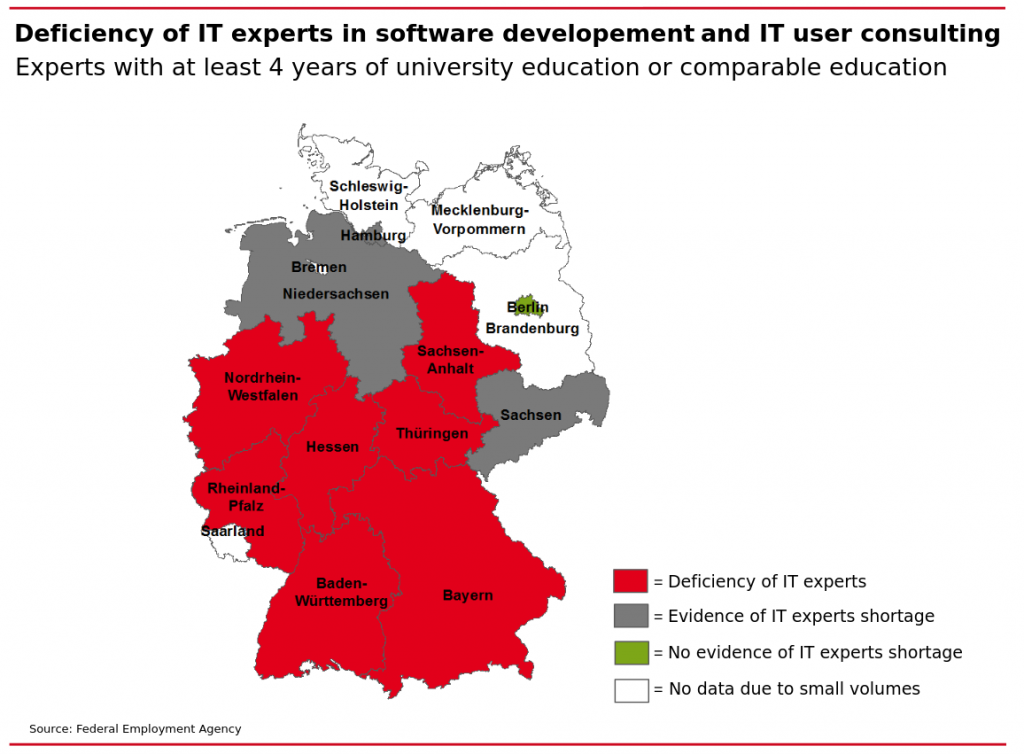 *** – The vacancy period covers the period from the planned hiring date to the actual cancelation of the open job position by the employer. All unclear terms see GLOSSARY